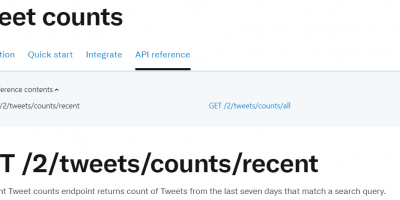 This post is a recap of the past few days activity.

Version 2 of the new Twitter API was shipped this week. Version 2 is a ground up rebuild of the Twitter API and lets you surface a whole new range of insights, metrics, behavioural data and more.

At the time of writing, the following endpoints are available:

The production endpoints for V2 are open for early access through the new developer portal.

Through the Labs initiative and with the support of the DevRel Team at Twitter I built an SDK for .NET developers. It’s called Social Opinion API. It makes it easy to connect to the new Twitter API, extract data and tap into the public consciousnesses with a few lines of code.

For example, here you can see how to use the Social Opinion API to search for 100 Tweets with references to “iphone”: And a sample of the Audience Intelligence:

Where can you get the Social Opinion API?

The Social Opinion API is written in C#, targets .NET Core and is available on the Twitter API developer site in the Tools and Libraries section:

This weekend the Social Opinion API was ported from using Labs Endpoints to the production counterparts meaning that it has support for:

Before using it however you must create a new Twitter Developer Project and Application with the new Developer Portal.

I have a collection of blog posts that covered each of the endpoints as I built each integration which you can look at and serve as good background information.  You can get early access to the new Twitter API and Developer Portal here.

The Social Opinion API has been versioned to match the versioning of the new Twitter API (v2) and going forward it will be kept in line with new releases of the Twitter API. As the API grows and I might need some help keeping it updated. If you would like to contribute, then let me know.